It’s winter already – Sydney cares not for your calendars, apparently.

Winter demands comforting braises from stodgy ingredients. One cold night recently, all I wanted to eat was lentils and chorizo. So, I just chucked them all in a pot to see what would happen.

This recipe would actually do really well in a slow cooker. As I don’t have one, and had limited time on a weeknight, I decided to go with boiling the fuck out of it. It tasted just as good. 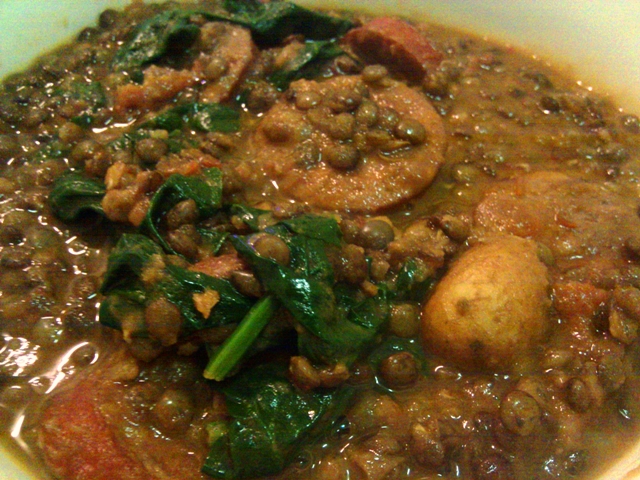 1. Pour a big lug of olive oil in a large pot on medium heat. Add the garlic and chilli, taking care not to burn.

2. Once they become aromatic, throw in the chorizo. The idea is to get the flavour of the garlic, chilli and chorizo into the olive oil, so that it permeates the dish.

3. Throw in the lentils and about 5 cups of water. I’ve found lentils will just keep on soaking up water until they become a goopy mess, so don’t panic if you think you put in too much at this stage – the recipe should be fairly lacking in texture, as we’re going for comfort, not gourmet.

4. Throw in a tin of tomatoes and stir. Proceed to boil the fuck out of it, check back frequently that the water hasn’t boiled down to nothing. You still want your lentils to cook, but you don’t need a soup. A top up or two will be needed.

5. When the lentils are just starting to being cooked through (if you pick one up, it will start to give way if you squash it between you thumb and forefinger), but not entirely, add the passata and potato. If it looks too thick to cook the potato properly, add more water as well.

7. Once the potato becomes soft, turn the flame down to low and check the seasoning. Chorizo usually has a high amount of salt in it, so you may not need to add any at all. Season with salt and pepper as required, and simmer for a few minutes.

8. When the lentils are soft, chuck in the spinach. You don’t want to add it any earlier, because it will boil away to a tasteless piece of string. You want it just wilted.

9. Serve in big bowls, curled up on the couch with a blanky, in front of the heater. You may want to serve crusty bread, as well (make sure you shake your blanky out afterwards).

*I was originally going to do a vegetarian version, using mushrooms and a couple of table spoons of smoked paprika instead of chorizo. You should add the smoked paprika at the stage you would have added the chorizo. Don’t add the mushrooms until the end, because they will turn to mush (geddit?) with all the boiling. Add just before the spinach.

Like Loading...
This entry was posted in My Own Recipes and tagged Chorizo, Dinner, Lentils, Potato, simple recipes, Spinach, Winter. Bookmark the permalink.

2 Responses to Braised Lentils and Chorizo